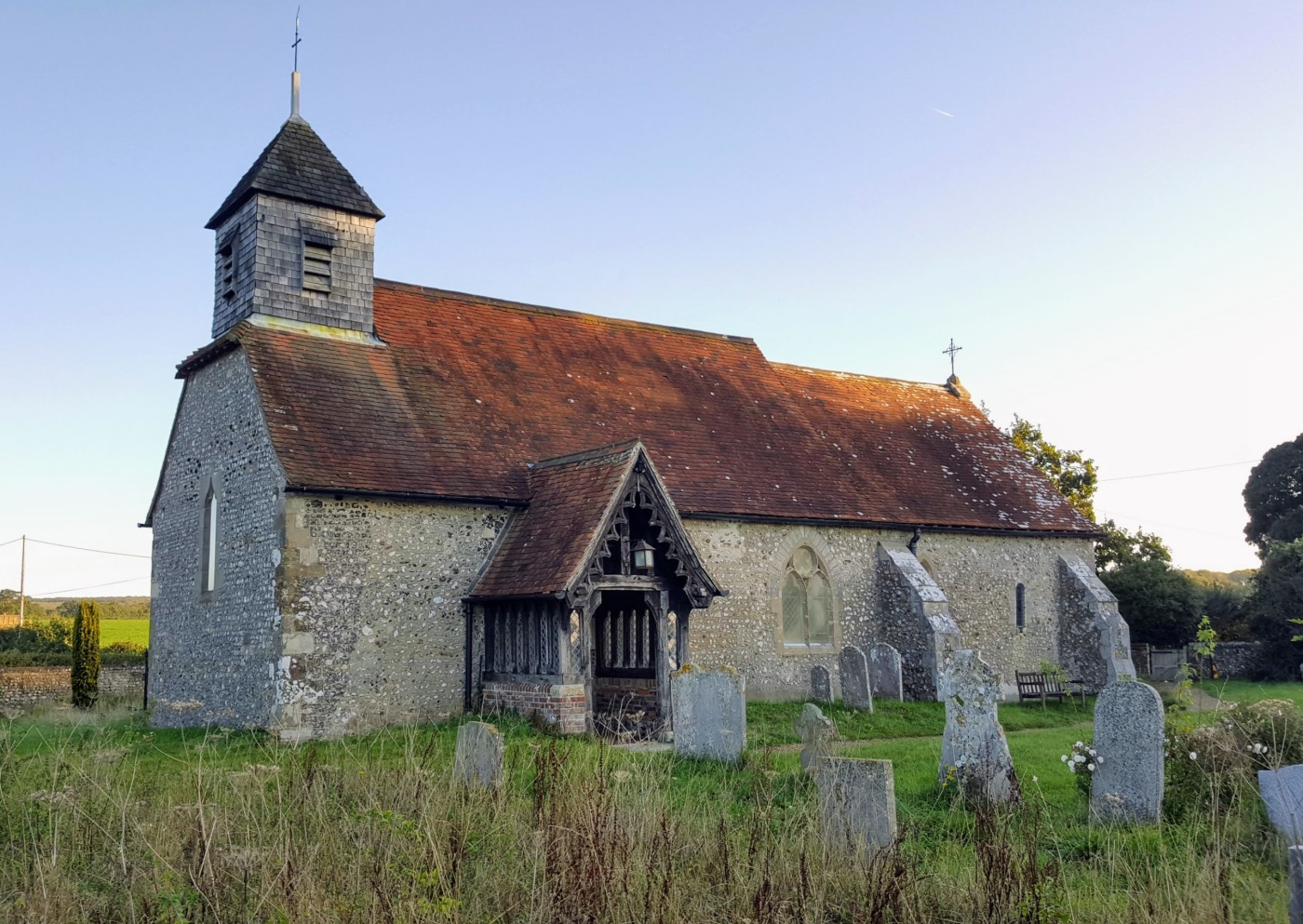 Binsted’s 12th Century church invites questions. It serves the community today, as it has for almost 900 years. But back in 1150 the village was on a peninsula, its looping lane surrounded on three sides by marshes. Why build a church on this spot? Who were the parishioners in previous centuries?

One ancient feature may have made this an attractive plot. St Mary’s stands atop the large Iron Age earthwork known as War Dyke, giving the church a prominent position above Binsted Valley, visible from the neighbouring village.

Further up the valley is another prominent outcrop – the Anglo-Saxon meeting place known as the Moot Mound. A long established gathering place which may have bolstered the call for a church.

The landscape tells other stories. The long history of farming in the area is clear, and tenant labourers will have built homes here. The uneven ground beside the church, where brambles now grow, is a memory of the later ‘poorhouse’.

Dig a little deeper and there are further clues.

Evidence of industry going back centuries is found in the excavations of a bell foundry and medieval tile kilns – including one, near the cluster of houses once known as All the World (and pictured in the 1960s cutting below), that would be destroyed by a proposed Bypass route.

The kilns date from the 13th and 14th century, but clay mining in the area could predate them. It is possible there are more kilns yet to be excavated. (Another is pictured below, excavated in the late 90s/early 00s). Was there industry here when the church was built?

The woods provide answers, too. A walk in the woodland named Brick Kiln Copse kicks up 18th century brick fragments. And close to the Moot Mound is a group of Ash Tree ‘coppice stools’. These trees were cut and regrown in such a way as to provide fuel – probably for the tile kilns down the hill at All the World. Some among them are eight centuries old.

Today, Binsted’s criss-cross of lanes and footpaths makes it a peaceful place to walk, a land seemingly little changed in centuries.

But pause on Scotland Lane, look across once-common fields to the church, the lane, the coppice woods, and stretch your vision through time. Now you picture a landscape busy with the comings and goings of the past – tenant farming, the bringing of animals to ‘Forest courts’, the mining of clay pits, the cutting of wood for fuel, the firing in kilns of roof tiles and patterned pottery.

And suddenly the little church doesn’t seem so remote after all.

More on the Binsted tile kilns, here and here

Thanks, as ever, to Binsted sage, Dr Emma Tristam: “Ranger Bob Epsom measured the Ash for me and gave me a diameter of 2.7 metres. Then the Oliver Rackham book ‘The Ash Tree’ fell open at a page on how to tell the age of coppice stools…”

Painting of the Poorhouse beside Binsted Church, by Charlotte Read